Update (December 2016): If you’re looking to buy a genuine battery, it looks like Encompass, one of LG’s authorized distributors in the U.S., has the genuine battery in stock, so you should check their website first. They also appear to stock the BL-T19 (EAC63079601) for the Nexus 5X as well, although it is currently on backorder.

Recently, I started playing Pokémon Go, which made my realize that the battery on my Nexus 5 had deteriorated. Since it’s been approximately two years since I originally purchased the phone, I looked into buying a replacement battery, but discovered that it is apparently very difficult to purchase a genuine replacement battery. For reference, the battery used in the Nexus 5 (US: D820, World: D821) is labeled as a LG BL-T9, rated for 2300 mAh typical at 3.8 V for a total of 8.74 Wh. The actual battery cells manufactured by both LG (1, 2) and Sony (1, 2), with LG batteries having part number EAC62078701 LLL, replacement part number F289368, and battery part number, LGHD4ZQ4556, and Sony batteries having part number EAC62079101 SLB and replacement part number US465661H 2. For information about verifying the authenticity of a battery, refer to the bottom of the page.

Initially, I bought a replacement battery online for $11.98, which was advertised as a new “Genuine OEM” battery from a highly-rated seller on eBay. Through a shipping mishap, I ended up with two batteries, but unfortunately it turned out that none of the advertised attributes were true. 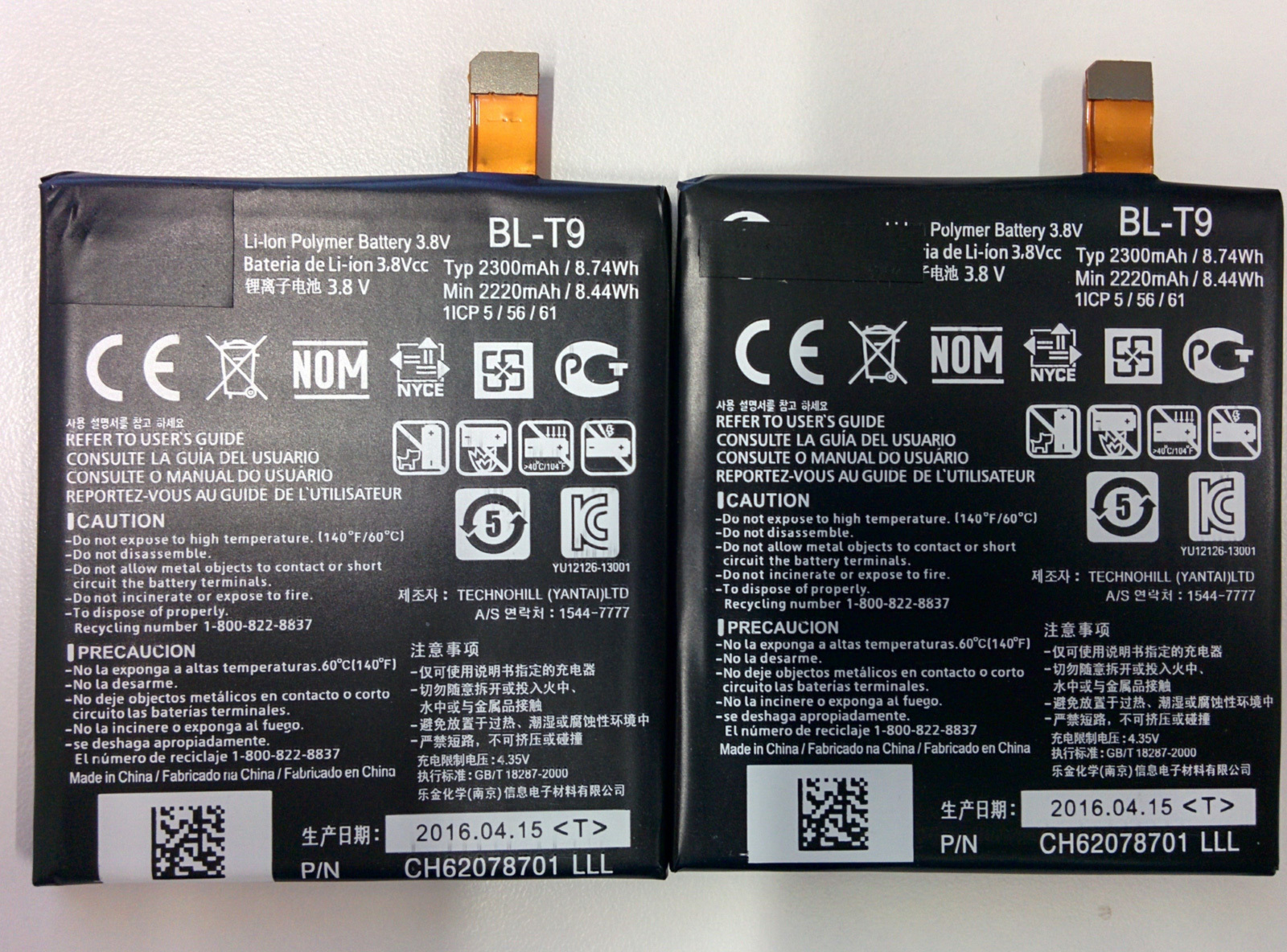 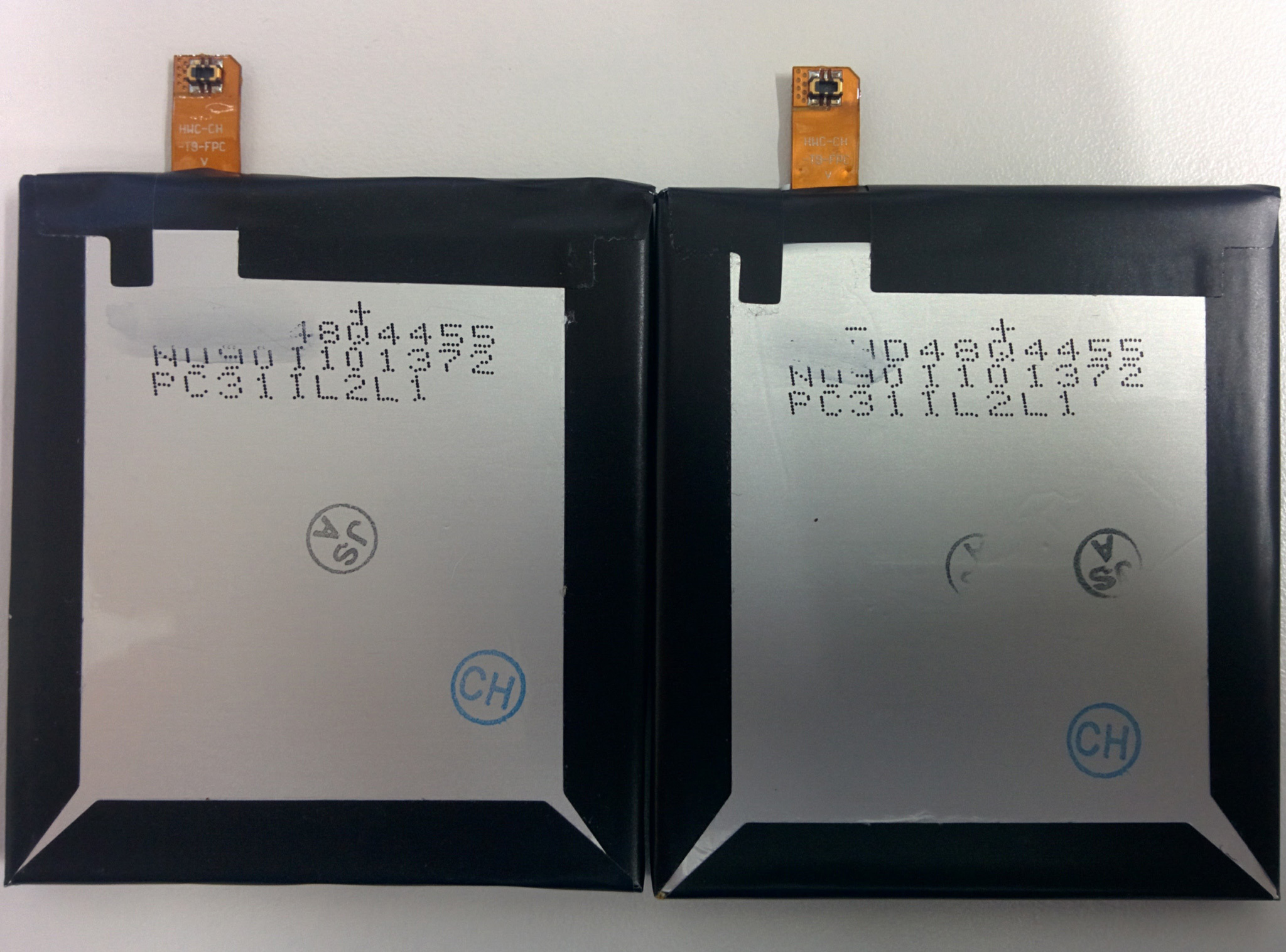 Back view of counterfeit batteries

Luckily, it’s fairly obvious that this battery is counterfeit. Here’s a non-comprehensive list of some characteristics to watch out for:

And if that’s not enough, let’s remove the labeling on the counterfeit battery to take a closer look. 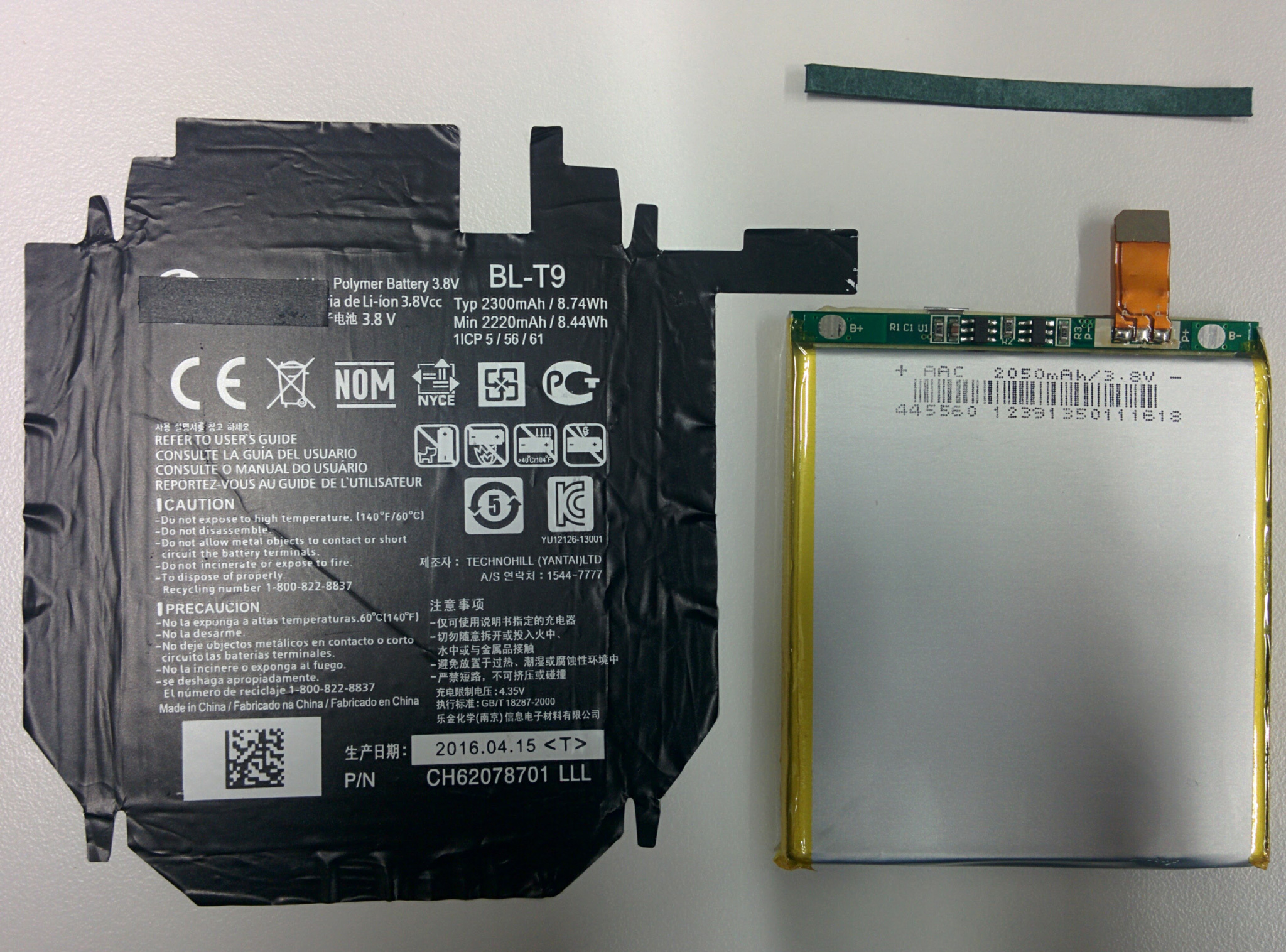 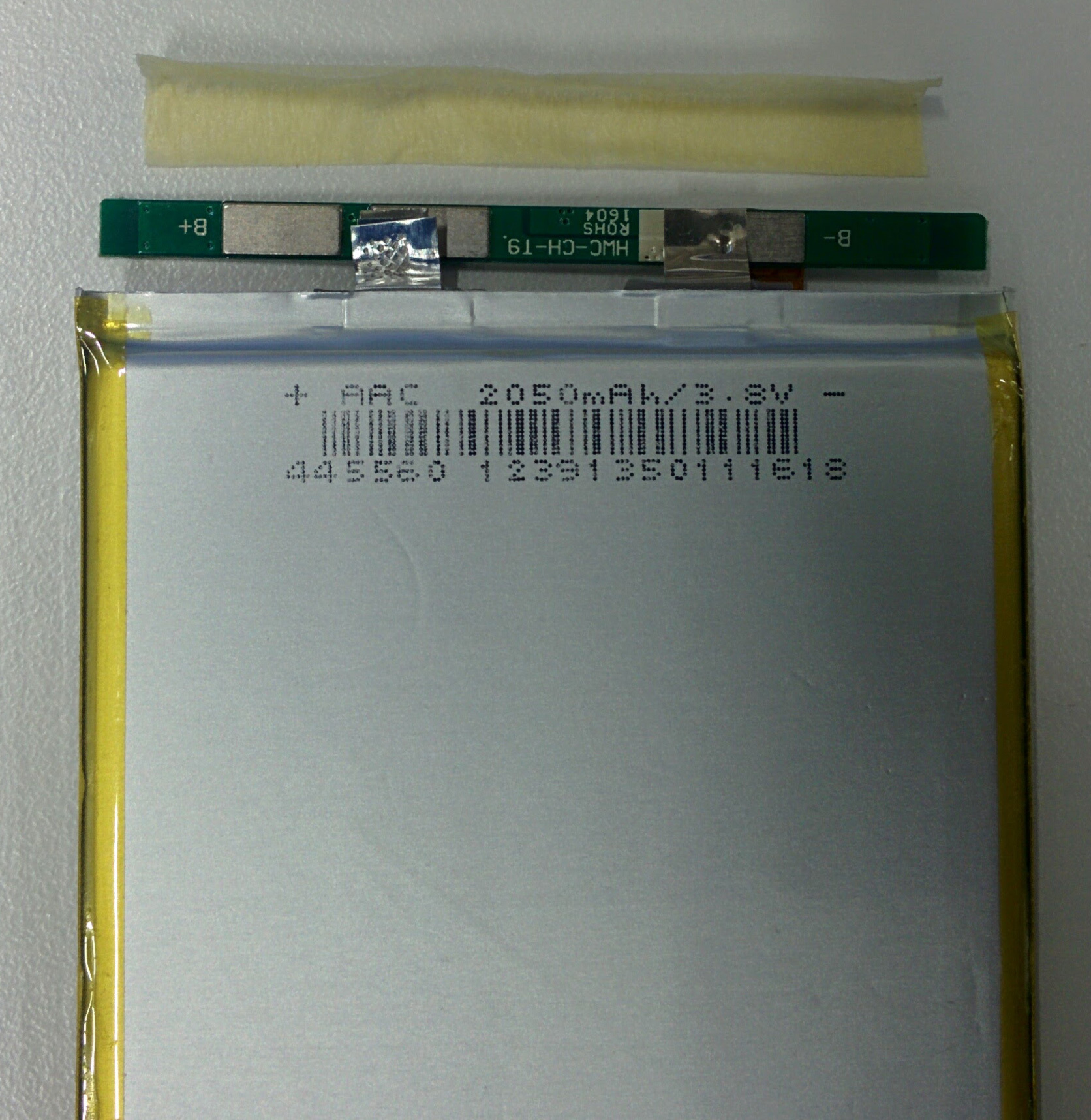 Top view of a counterfeit battery with labeling removed

The protection circuit board appears to have been designed for compatibility with multiple different battery cells, likely to save cost due to supply chain issues, since there are two B+ contacts on the board with different spacing. It turns out that the quality of these counterfeit batteries isn’t great either; not only do you get less than the advertised capacity, but the spot welding of the battery tabs onto the B+ and B- contacts of the protection circuit board is pretty sub-par, with the B- contact barely held on by a single weld. The use of masking tape as an insulator for the battery tabs, again likely to save cost, is also pretty bad; the standard for this type of applicaiton is Kapton (polyimide) tape. As an aside, I’d be curious to know what the two chips on the circuit board are: they appear to have SOT23-6 packages with markings 7071 and 8810; drop me a line if you figure them out.

Eventually, I discovered that there’s only one source for guaranteed genuine replacement batteries—LG themselves, or one of their authorized parts distributors. Unfortunately, the only authorized parts distributor that I could find with the BL-T9 battery in stock is their German distributor, EURAS / ASWO Service GmbH (use Google Translate and search for BL-T9), which sells it for € 32, but doesn’t ship to the United States. So, I set up an account with a German mail forwarding service, and purchased the battery.

Alas, I encountered another snafu—IATA recently enacted a prohibition on shipping lithium-ion batteries in passenger aircraft, effectively April 1st, 2016. Even though the Nexus 5 battery has ≤ 20 Wh of capacity and contains only a single cell, this means that it is classified as a dangerous good by virtually all shipping companies, which have strict limitations on shipping such batteries, especially if they are packed individually without equipment under section II of the UN3480 PI965 regulations. In particular, Deutsche Post, the privatized German national mail carrier, has limited service and requires separate account approval for such batteries. The only other shipping method offered by my forwarding service is United Parcel Service (UPS), which does accept lithium-ion batteries, but requires special labeling, a completed Lithium Ion Safety Document, and is significantly more expensive. In the end, I bit the bullet and paid the shipping fee.

Here are some photos of the genuine battery that I received, and of the original battery from my Nexus 5 that I replaced. 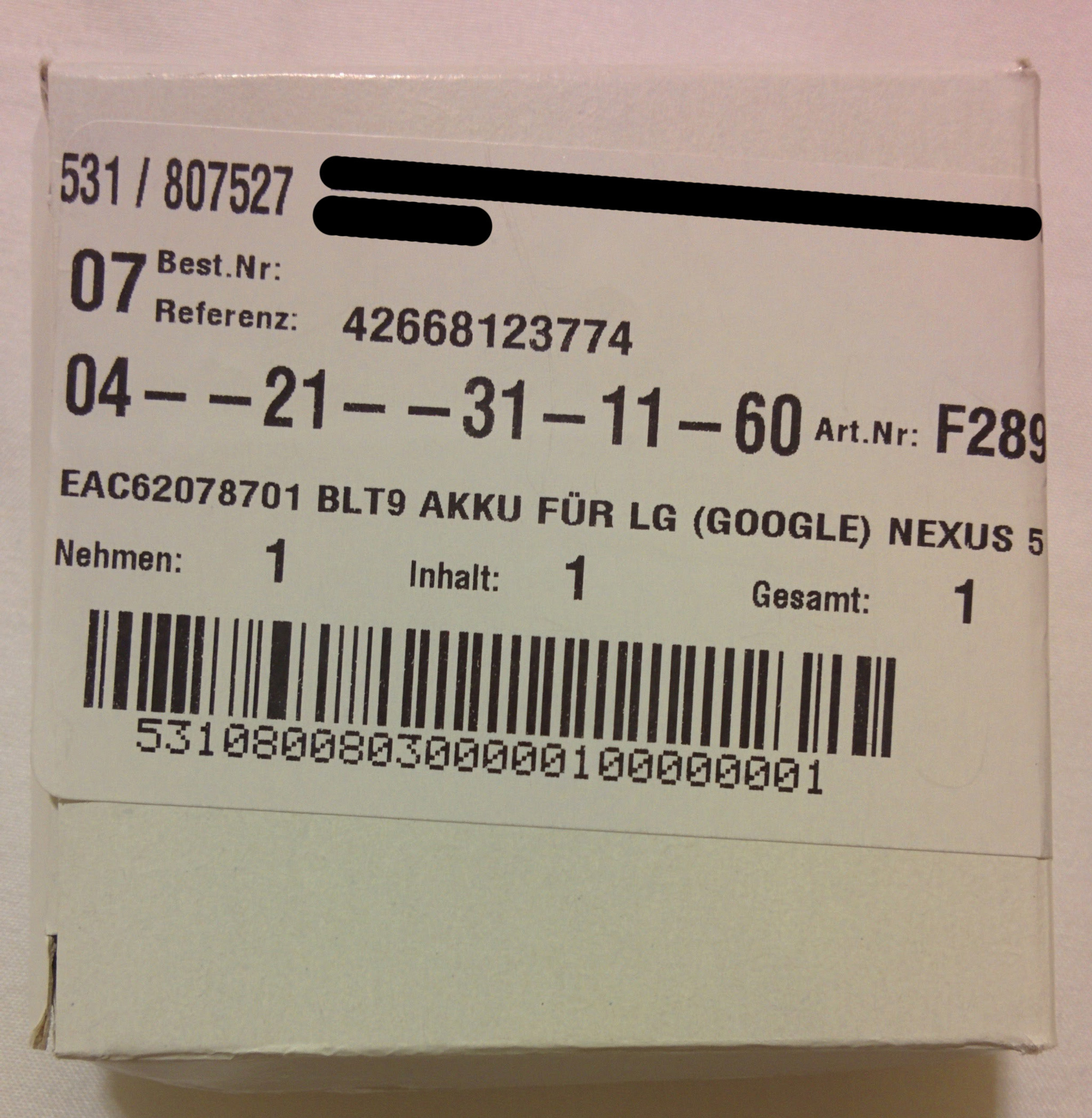 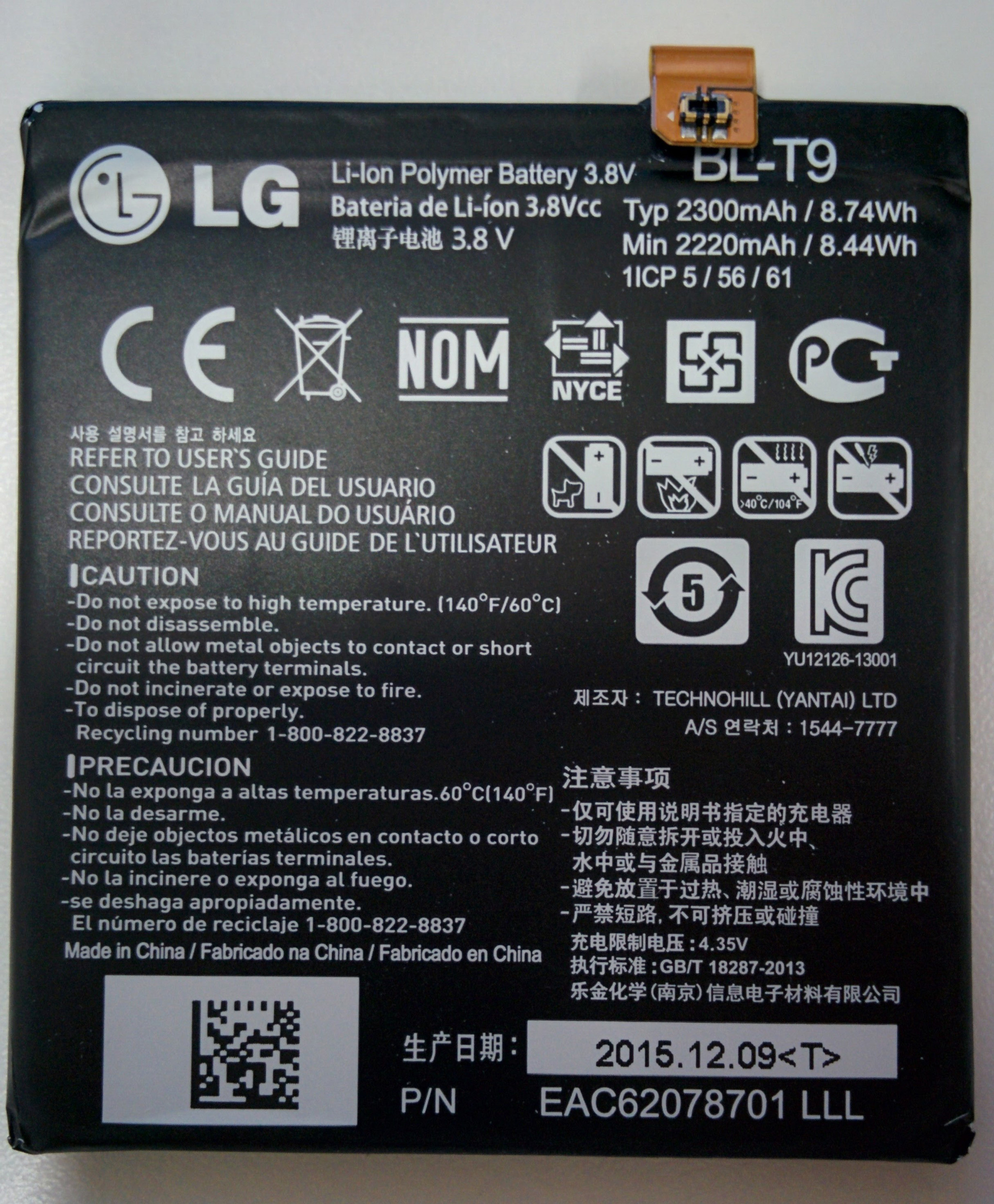 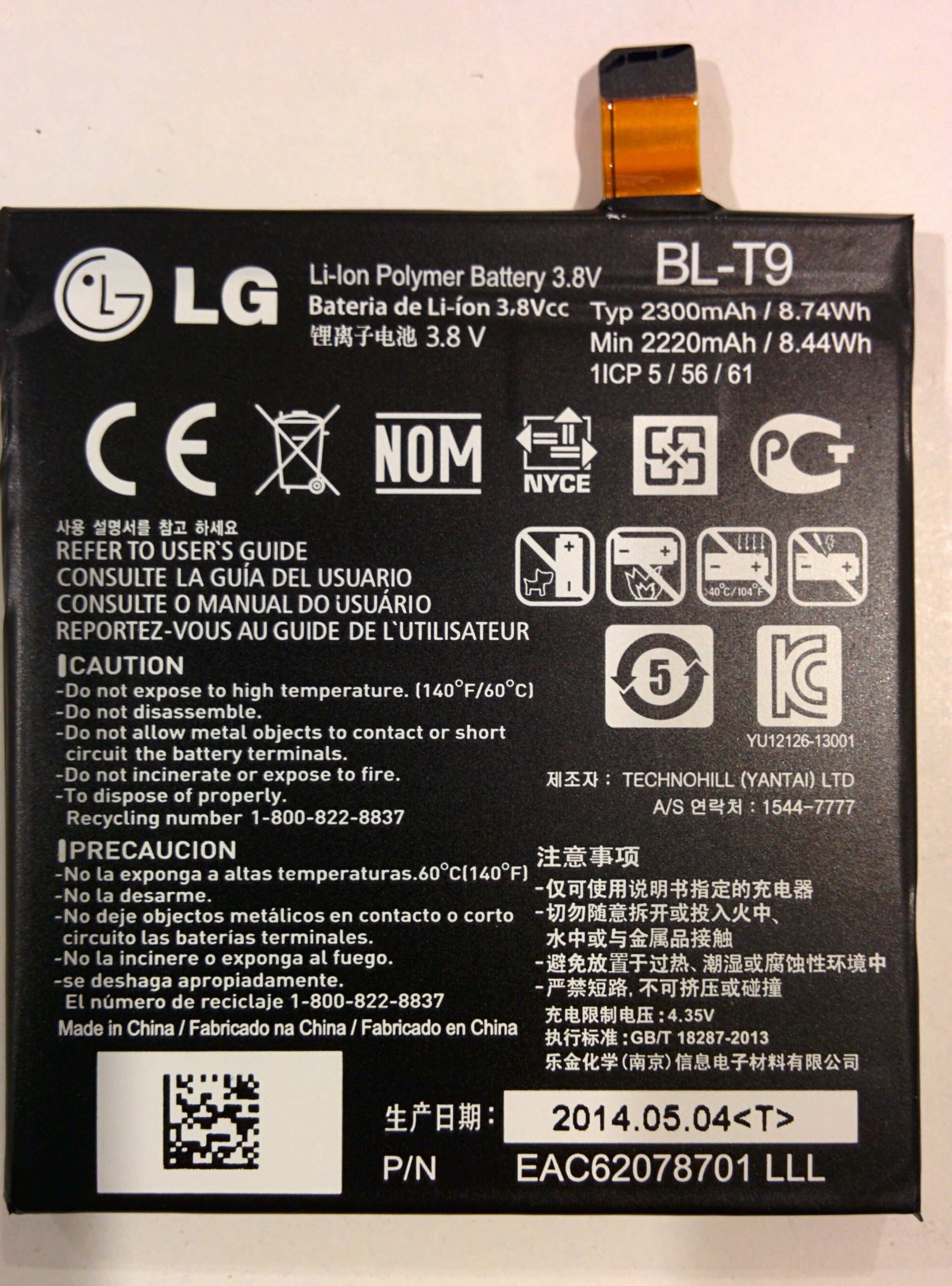 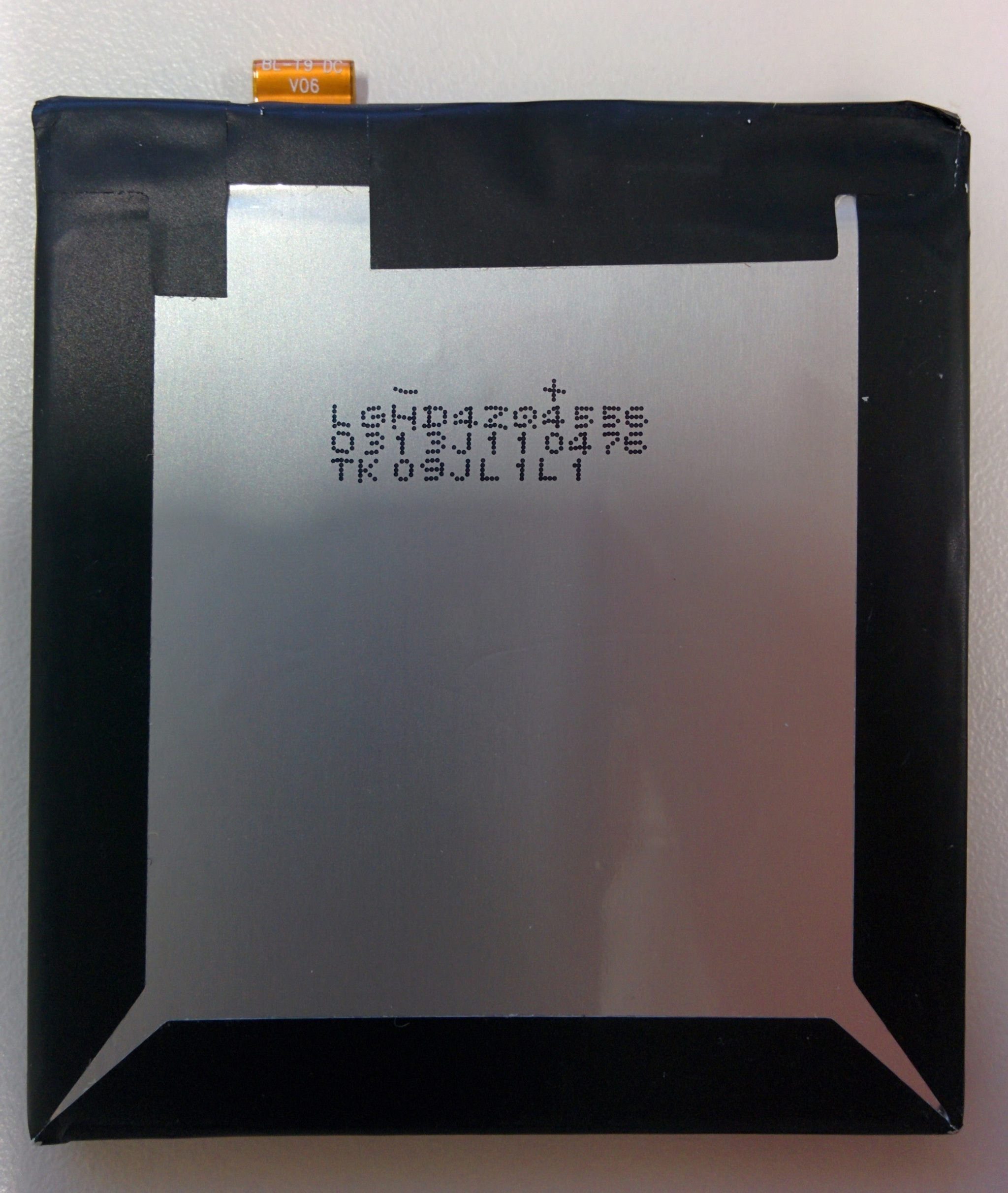 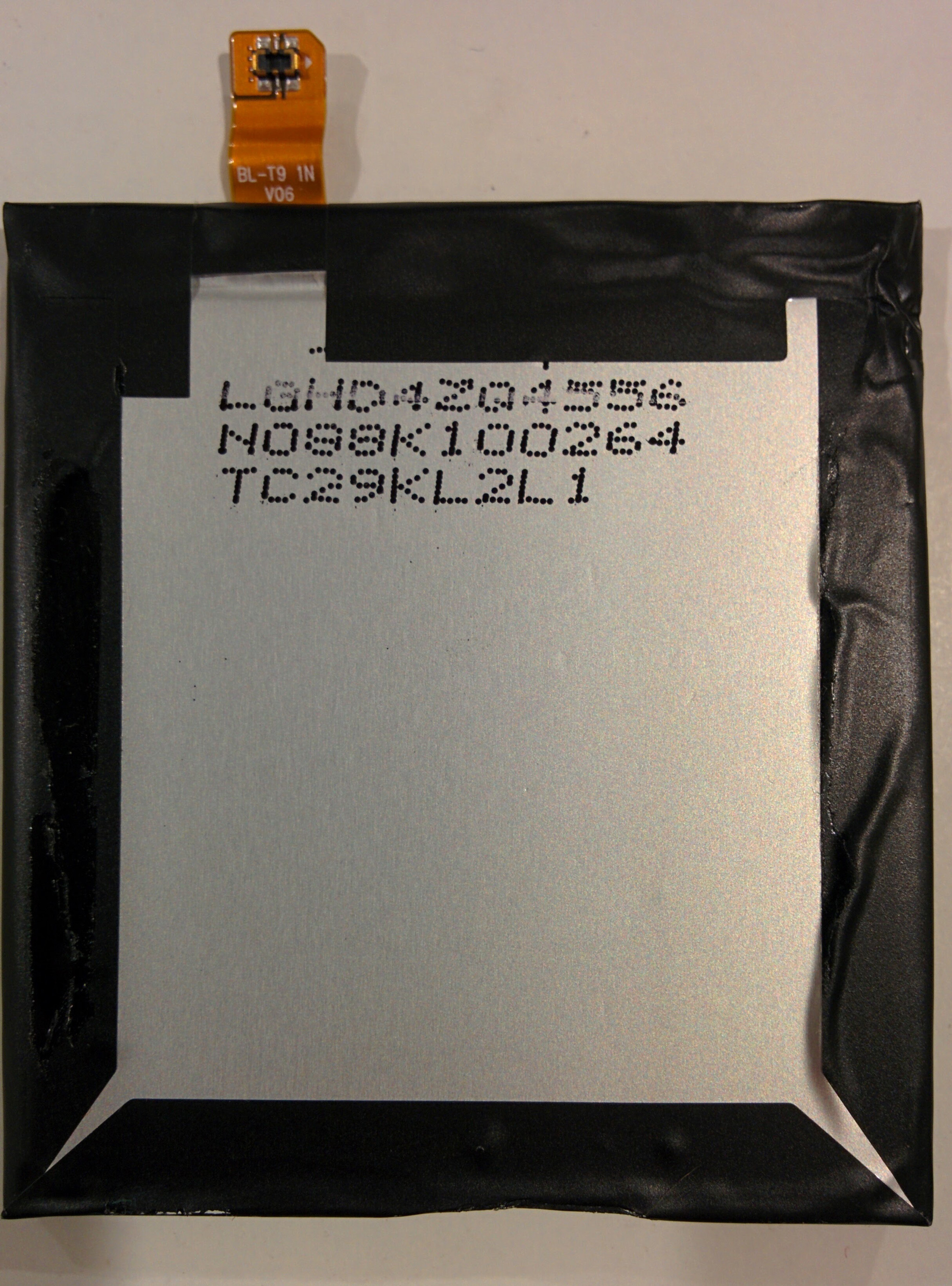 Below is a short checklist for verifying the authenticity of a Nexus 5 battery. Note that I’ve only personally verified this with cells manufactured by LG, which appear to be the majority.